Understand, plan and execute your hunts.

The Land of Hidden Dragons

Players can enter this zone at level 30, however it is recommended to be level 60+ to effectively level here. Should you wish to adventure at a lower level, enter the Dwarf Village. This zone is the lowest difficulty. This reward map focuses on high exp and and really high spawn rate of monsters making solo leveling very difficult. This map was designed for party hunting, and as such there is a Bonus applied to parties with 3 or more players. To receive the bonus, there must be atleast 3 different classes in the party and be active on the screen at all times.

This large hunting zone is divided into multiple hunting zones, with varying difficulty. The zones available for teleport are listed below for comparison: 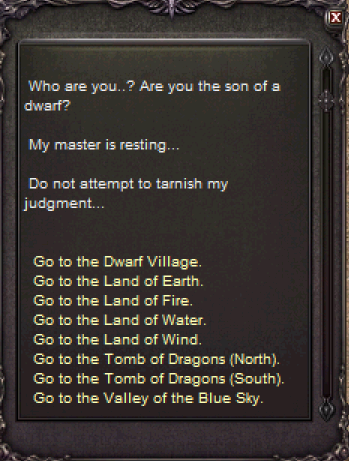 Land of Hidden Dragons (Valley of Blue Sky - Difficulty: High)
Note: The mobs in the new zone are higher level, more health points and much harder to kill and farm. While the (grouping) EXP is better than solo (grouping) EXP in Giran Prison, its extremely difficult and slower. Overall, it is viable to solo hunt for Adena and somewhat decent EXP.. the real benefit comes with Party Hunting. With a party of 3 or more different classes all contributing, the monsters die just as fast as solo hunting in GP and the large area allows for moving around to different zones making it more effective to group hunt here, than solo in GP.

Giran Prison (4th Floor Big Room)
Note: The mobs in GP die faster than Hidden Dragon lands when solo, but there is no benefit to party hunting because the added party members do not benefit killing speed enough to warrant the party distribution of the EXP. &ltLast Update - Feb 11th, 2020 10:04 PM EST>