Jack-O-Laterns have invaded Aden following All Hallows' Eve, when they feel they are safer from persecution. The evildoers appear to with no other goal than to harass the Pumpkin Traders. Luckily, there is an incentive to destroy them from the lands of Aden. The Pumpkin Traders are offering rewards for evidence that the Jack-O-Lanterns are being defeated!

Hunt around Aden and kill the Jack-O-Lanterns and bring the pumpkin seeds back to the Pumpkin Traders in the major cities of Aden for rewards.

There are two Halloween themed items that will only stay after the event if they are enchanted +8 or higher! The Halloween Pumpkin Armor and Pumpkin Sword.

The Pumpkin Candy can be fed to the Jack-O-Laterns for a guaranteed Pumpkin Seed!

Eat the candies for a surprise.

The Lightning DK Poly has a Shield. Therefore, it is limited and can't use Stun or Counter Barrier, but has a faster attack than the Fire DK Poly. 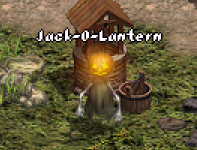